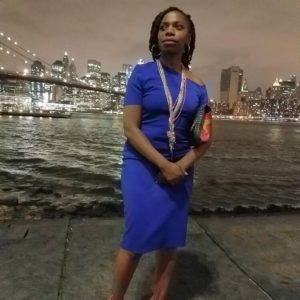 Catherine Mbali Green-Johnson is the Founder and Executive Director of ARTs East New York Inc. (AENY), a non-profit arts organization whose mission is to provide access, affordability and exposure to the arts for the East New York community while using the arts as a tool for social change. Founded in 2009, AENY has served more than 10,000 constituents and 1 million dollars in charitable assets under management to date, is the only arts CBO in the East New York, Brooklyn area, one of the largest arts specific providers of services to youth, and among the community’s top organizations.

Under the leadership of Green, AENY has accomplished several milestones including launching artist exchange program for teens in the community in that includes traveling abroad to Cuba, an arts program that has grown from 10 students and now serves over 100 youth in the community as well as producing a concert series that has attracted over 2,000 community residents. Her innovative and thought provoking approach to programming has gained the attention of media outlets such as The New York Times, New York Daily News as well as Good Morning America. Pratt Institute, Union Square Awards as well as the Rockefeller Foundation have supported her vision for the organization. 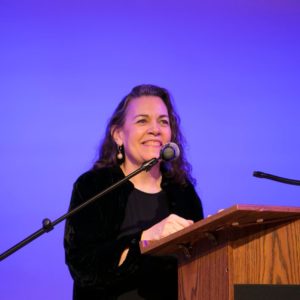 Ryan Gilliam is a theater artist and cultural organizer.  As co-founder of Downtown Art (DTA), she developed innovative programs, first serving emerging professional artists and then transitioning to focus on community-engaged arts initiatives, including her work collaborating with youth.  Early DTA productions were awarded OBIE and BESSIE awards, and the company received an OBIE Grant.  She is a co-founder of FABnyc and became Executive Director in 2017.  Ryan played a central role in establishing the East 4th Street Cultural District, led Downtown Art’s transformation of a vacant building into a new cultural and community center, opened in 2016.  Her work with young people has been presented at the Queens Museum, El Museo del Barrio, MOMA/P.S. 1, El Puente, University Settlement, the Tenement Museum, and the Highline.  She received a Bank of America “Local Hero” award, ART/NY “Local Hero” award, has a B.F.A. from NYU’s School of the Arts and a M.F.A. from the Yale School of Drama.
__________________________ 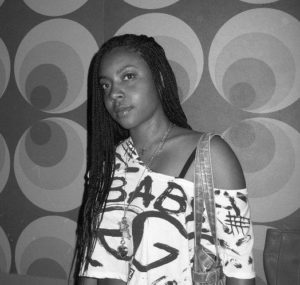 With over 15 years of experience (curator, journalist/editor, and marketer), Amy “Aimstar” Andrieux is a veteran of global programming and campaigns across print, web, mobile, video and live events that are grounded in the arts and social justice. Andrieux is the Executive Director of Museum of Contemporary Arts of the African Diaspora (MoCADA) 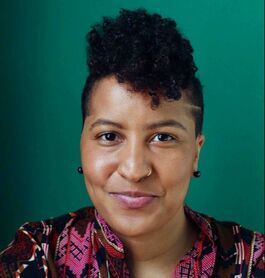 Jordana is a Brooklyn-based director and creative producer. She creates performances, gatherings, and public programs that question what it means to be free and, more urgently, how we are helping each other achieve this freedom. Her practice sparks cross-cultural dialogue and expands the concept of community. Before joining JACK, Jordana held positions at the Story Pirates, Young Jean Lee’s Theater Company, 52nd Street Project, and INTAR Theatre. Most recently, she served as Program Manager at Park Avenue Armory where she was instrumental in the creation of the institution’s Public Programs Series. Jordana is a member of Theater Communications Group’s 2019-2020 Rising Leaders of Color Cohort and is dedicated to achieving equity and inclusion in the arts. 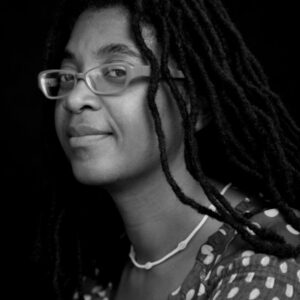 Kemi Ilesanmi is the Executive Director of The Laundromat Project, which advances artists and neighbors as change agents in their own communities. Prior to joining The LP in 2012, she was Director of Grants and Services at Creative Capital Foundation. From 1998-2004, she was a visual arts curator at the Walker Art Center in Minneapolis. She serves on the boards of the Joan Mitchell Foundation and The Broad Room, as well as advisory boards for WNET All Arts and Smith College Museum of Art. In 2015, she was appointed by the Mayor to the NYC Cultural Affairs Advisory Council. In addition to her leadership roles, Kemi lectures extensively across the country and contributes to cultural scholarship. She has been honored by the Metropolitan Museum of Art and Project for Empty Space. She received her MPA from NYU Wagner and BA from Smith College. Kemi is also a graduate of Coro Leadership New York and a member of the Sterling Network. 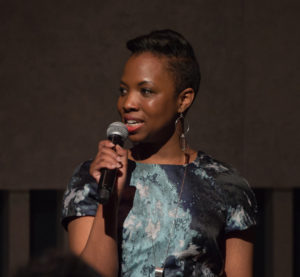 Ayesha Williams is an art professional with over a decade of experience working with visual artists, presenting programs, and generating funding for both commercial galleries and nonprofit institutions. From 2010-2016, Ayesha managed Visual Arts at Lincoln Center, a comprehensive program that provides visual art offerings and experiences to Lincoln Center’s audiences and supporters. Prior to joining Lincoln Center, Ayesha was the Director of Kent Gallery. In addition to her professional experience, Ayesha is on the board of The Possibility Project and also serves as a Steering Committee member of the UN Women’s Conference 2016. Ayesha received her Master’s degree in Visual Arts Administration from New York University and Bachelor’s degree in Political Science from University of Southern California, Los Angeles. 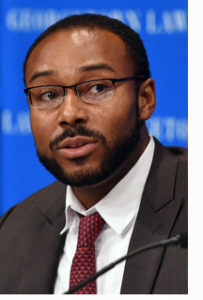 Before joining the Center, Hansford served as a democracy project fellow at Harvard University’s Charles Warren Center, as well as a visiting professor at Georgetown University Law Center. He has also served as a member of the advisory committee for the Sargent Shriver National Center on Poverty Law’s Racial Justice Training Institute and is currently co-chair of the Human Rights Committee for the Society of American Law Teachers.

Hansford, who lived ten minutes away from Ferguson in 2014, was at the forefront of legal organizing and advocacy in the aftermath of the killing of Mike Brown. Hansford has served as an advocate for proposed post-Ferguson reforms at the local, state, federal, and international level, testifying before the Ferguson Commission, the Missouri Advisory Committee to the United States Civil Rights Commission, the President’s Task Force on 21st Century Policing, and the Inter-American Commission for Human Rights. He also accompanied Ferguson protesters and Mike Brown’s family to Geneva to testify at the United Nations. Hansford is the co-author of  Ferguson to Geneva: Using the Human Rights Framework to Push Forward a Vision for Racial Justice in the United States after Ferguson.

Hansford has been featured in USA Today, The Washington Post, Time Magazine, Ebony, and has appeared on CNN, MSNBC, PBS, and NPR. He holds a B.A. from Howard University, and a J.D. from Georgetown University Law Center, where he was a founder of The Georgetown Journal of Law and Modern Critical Race Perspectives. He served as a law clerk for Judge Damon Keith on the United States Court of Appeals for the Sixth Circuit. 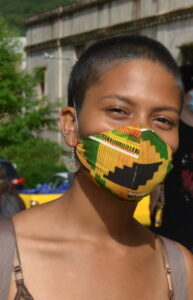 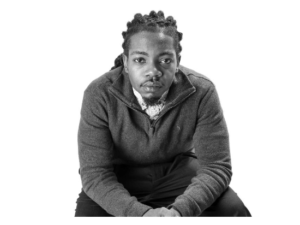 Robert Thomas is 33 year old native of Asheville, N.C. He is an experienced Community Leader with a knack for innovation, who centers his work around advocating for those most impacted by the inequities of the Criminal Justice System. As a former Justice involved individual himself, he understands the negative impacts and disparities faced by people of color in the carceral system. With over 10 years of direct experience, Robert has now narrowed his focus to racial justice, decarceration, and activism around police accountability. In addition, Robert is the newly named Community Liaison for the Racial Justice Coalition of Asheville and a partner of a minority-owned Equity Consulting Firm. 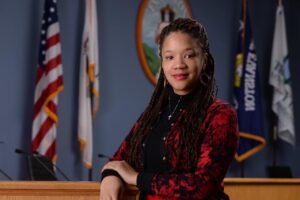 Robin Rue Simmons
Strategist, Civic Entrepreneur and Alderman of Evanston’s 5th Ward
Guest, Reparations in EvanstonRobin Rue Simmons is a strategist, civic entrepreneur and alderman of Evanston’s 5th Ward.  Ald. Rue Simmons began her career 22 years ago when she launched her first business as a real estate broker. Troubled by the wealth disparities and concentrated poverty in urban communities, she wanted to help young adults build wealth early through homeownership. Over the course of her entrepreneurial career, she has launched and operated multiple businesses, including a bookstore that offered free afterschool programming and a construction firm that employed dozens of minority skilled tradespeople, and has developed dozens of affordable homes funded by the Neighborhood Stabilization Program.

Rue Simmons was elected 5th Ward alderman for the City of Evanston in 2017. Since taking office, she has prioritized improving the lived experience and expanding opportunities for Black residents. Most notably, she led the passing of the nation’s first reparations program, which will be funded by the first $10 million of Adult Use Cannabis sales tax revenue. Robin is the chairman of the Reparations Committee and a strong advocate for social equity applicants in the cannabis business.

Known for her “Solutions Only” approach in service and business, Ald. Rue Simmons is the director of innovation and outreach at Sunshine Enterprises, which has supported over 1000 neighborhood entrepreneurs (98% African American, 74% women) in launching or growing a business. She also serves as chief strategist at Ujima Solutions Group, LLC, in addition to managing residential and commercial property that she owns. In her free time, she enjoys her family, new experiences and forest bathing.