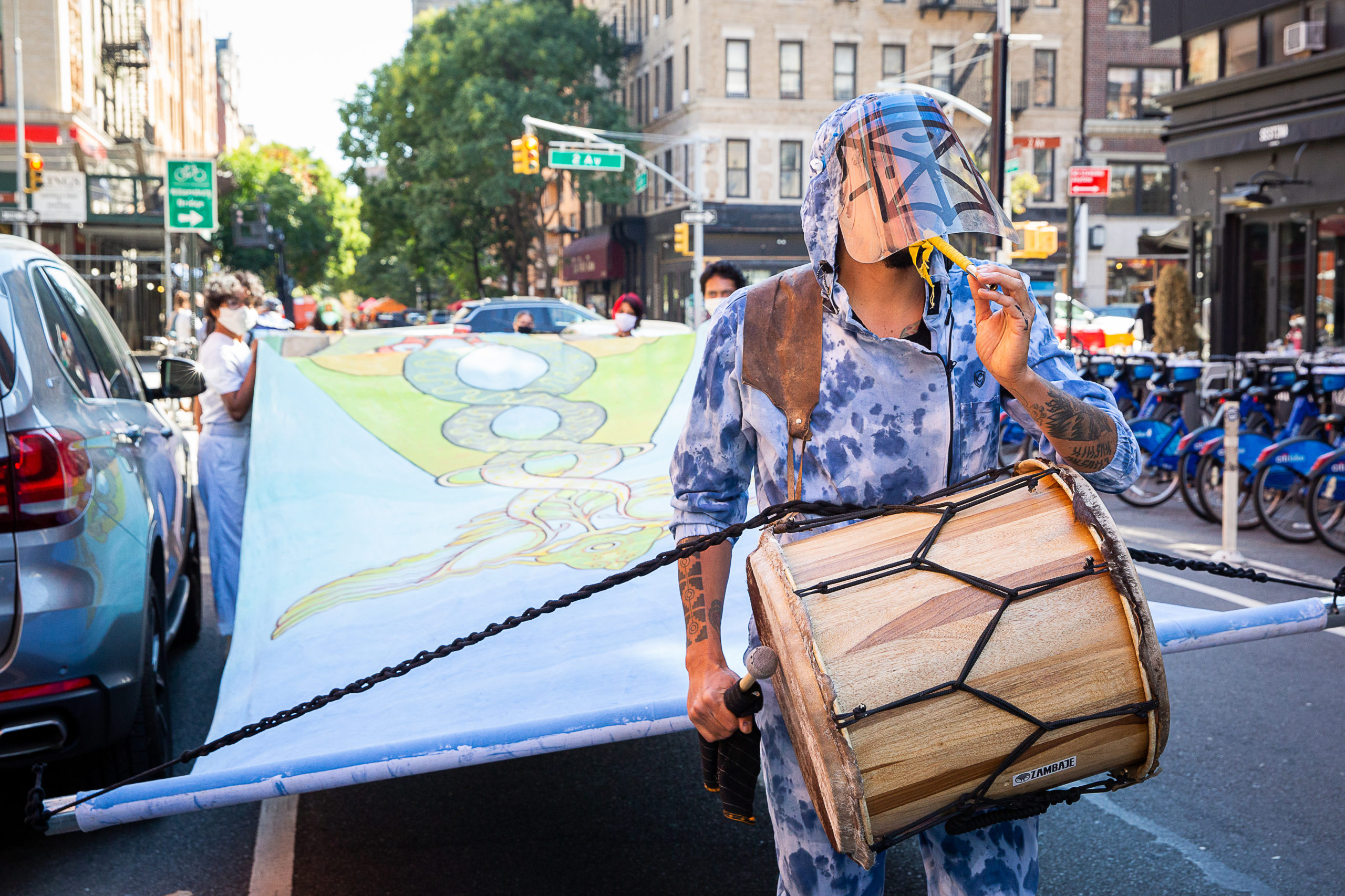 Intermittent Imprints (to walk along the river) is an installation and performance by Raul Ayala that unveils the neighborhood’s pre-colonial ecologies, with the waterway that once flowed through East 4th Street down to the East River acting as a reference point for considering our vital relationship to water in a time of rapidly advancing climate change.

The core intervention of Intermittent Imprints is a large-scale canvas painted by the artist, which includes representations of animals whose ties to water are considered sacred in various indigenous traditions of the Americas. This canvas will be hung to cover much of the building at 70 E. 4th Street, after taking it on an artist-led procession that traces some of the pre-colonial waterways around the block. In this procession, Ayala—donning personal protective equipment while playing Andean instruments typical to processional rituals—will lead a small group in wetting the banner with water from the East River, infusing it with the sacred liquid before it is hoisted and attached to the building façade, where it will be left to the elements until the exhibition closes.

This performative walk, partially inspired by Carolina Caycedo’s conception of geochoreography—a mode of political action that understands the land as part of one’s body, rather than apart from it—intends to activate the river and its tributaries in order to reaffirm water as a crucial public good. In channeling indigenous Andean knowledge and symbolism, ecological histories of Lenape land, and communal ritual, Intermittent Imprints seeks to acknowledge our deep, life-giving connections with our surroundings and reorient our understandings of the city to include what has been rendered invisible.

Raul Nantu Ayala is an Ecuadorean artist focused on muralism and socially engaged art. His work has been part of several international exhibitions, and Ayala was the recipient of the 2013 Create Change Professional Development Program of the Laundromat Project in New York City, and the 2014 Mentoring Program for Immigrant Artist of the New York Foundation for the Arts. Currently, he lives in Brooklyn working with organizations including Groundswell Murals, Artistic Noise and The Laundromat Project. Ayala is an active member of the People’s Climate Arts, an organization that serves as a movement-­wide resource that facilitates visual, performance, and new media art for use in public interventions. Ayala is a recent graduate of the MFA program at Rutgers – Mason Gross School of the Arts.

This project aims to make a relationship between different time frames on the FAB/DTA land location. It recognizes an intermittent water stream that passed through the space and made its way to the East River—acting as a life source of the ecosystem on the block prior to the arrival of the first European colonizers in 1609—while also creating a philosophical connection with the river as a representation of the ever-changing quality of life. The work seeks to question the epistemic and power dynamics that the colonial enterprise brought, imposing an extractive relation with this specific waterway.

Public space and the building’s architecture are the entry points for the public to encounter a proposed act of remembrance, establishing a speculative relationship to water as a holder of memory and heritage while questioning its treatment during the colonial enterprise and current late capitalist era, which has held devastating implications for public health.

Drawing on different types of research, including maps as well as historical accounts of the flora and fauna that were once part of the Lenape waterway habitats in the Lower East Side, Intermittent Imprints places aesthetic interventions in the public realm that point to the role of water as an element that is sacred and necessary, as well as one that can take fraught forms when disrespected and misused. Even as the importance of water is profound, and its impact on our lives so ubiquitous, it is sometimes taken for granted; in response, this project ultimately acts as gesture of acknowledgement, intervening in the established structure of the block.

As part of the city-wide campaign #morewaysthanbroadways, DJ Yana Allpa (Danna Mendoza) was invited to share Andean sounds and invoke collective memory through music, activating the symbols and histories inherent to Ayala’s mural. See video of a short segment of her set below.